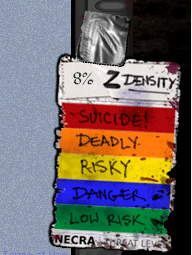 Z-Density, which presumably stands for Zombie Density, is the measure of danger posed by the quantity of zombies in a zone. SCUGS represents this level of danger by displaying different colors and density in a percentage, 0% being the lowest and 100% the highest.

Density is color-coded, as shown on the bottom-left area of all WotLD pages and in the image in this page. High density means that exposed survivors will feel more fear when traversing the zone, but armed and skilled survivors will also be able to kill more zombies.

Retrieved from "https://wotld.fandom.com/wiki/Z-Density?oldid=7716"
Community content is available under CC-BY-SA unless otherwise noted.